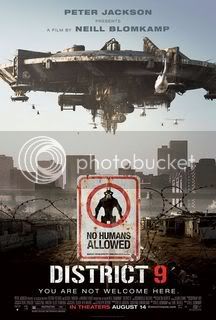 Science fiction has served as fertile ground for exploring sociopolitical issues through allegory: war, oppression, prejudice, and even, on occasion, the human condition. Bet every so often, a sci-fi project comes along—Blade Runner, Children of Men, Terminator, Battlestar Galactica—that so compels and provokes, it transcends its own genre in the process. District 9 is such a film. When humans become responsible for the well-being of a population of aliens stranded over Johannesburg, South Africa, they must confront their full capacity for fear, cruelty and self-identity. With an unknown cast, a newcomer in writer/director Neill Blomkamp, and a low-profile movie locale, District 9 manages to outshine all releases thus far as the best film of 2009, and one of the best of its generation. For the full ScriptPhD.com review, please click “continue reading”.

District 9 is an expanded version of Neill Blomkamp’s 6 minute short film Alive in Joburg, based on his reflection of growing up in Apartheid-segregated South Africa. In fact, all of the shacks used for creating “District 9”, the alien ghetto, were in actual Johannesburg slums, whose residents were temporarily “relocated” during the filming of the movie.

Watch Alive in Joburg in its entirety here:

District 9 is an extraordinary film that opens in an extraordinary way. A documentary style array of characters recount the historic arrival of an extraterrestrial ship over Johannesburg, South Africa. When the ship breaks down and stalls, humans cut their way in to discover a colony of starving, aimless aliens. A Department of Alien Affairs Workers engages with the creatures on behalf of humans. For twenty years, the aliens are restricted to a specialized slum zone—District 9—and subjected to live in poverty and exclusion. They are given Christian names, a pejorative slur (“prawns”), fed on cat food and rotting animal carcasses, and are treated as a subhuman problem. Smarter than they are given credit for, the aliens have their own language, subculture, thoughts and feelings. After living in degrading penury for two decades, they begin to fight back.

Amidst the escalating rioting, violence and lawlessness, the Multi-National United organization is formed (and no, the United Nations-like design and colors in their logo were not accidental), responsible for ridding District 9 of its now 1.8 million alien residents. This is where the action truly begins. As appointed head of the organization, Wikus van de Merwe weaves through the ghetto with his team, cajoling, harassing, and sometimes beating prawns into eviction. One particular prawn, Christopher Johnson, proves more resistant than the rest. His shack is hiding a chemistry laboratory producing a mysterious black liquid. In collecting and inspecting the weapons cache, Wikus is exposed to this liquid, setting of a cascade of consequences and choices. The liquid is the only fuel that will allow return to the broken mother ship by the aliens, but it is also embedded with the DNA and essence of the aliens. Several hours after his exposure, Wikus begins to rapidly morph into a prawn, becoming the “most valuable business artifact on Earth.” No longer considered human, Wikus is captured, tortured and narrowly escapes death at the hands of his former subordinates to hide in safety among the prawns. Christopher promises Wikus that he will revert him back to human form back on the mother ship if he can retrieve the fuel that now rests with MNU. Now wholly beholden to the mercy of the race he was trying to destroy, Wikus must betray his own race to save himself, and the aliens in the process.

What elevates District 9 as a film is deft thematic exposition. The prawns’ military-controlled, miserable, dirty fenced slum is an obvious parallel to every racial and ethnic human injustice—one could easily substitute it for the Warsaw ghetto, the Apartheid-Era Soweto slums, and, sadly, many American inner cities. More importantly, though, District 9 departs from other alien sci-fi fare to paint a picture of the aliens as oppressed, not the oppressors. Initial fears of an alien invasion quickly dissolve into sympathy over the conditions they are forced to live in and the arbitrary violence imposed by the humans driven by ignorance and fear. Only the most hardened individual could be unaffected by watching alien Christopher Johnson’s anguish as he crawls through butchered carcasses of prawns used as medical experiments. Wikus’s exposure, hybridization and eventual alien alliance serves as a reminder that sometimes, one must become ostracized to learn how to become human again.

The genius behind District 9 ultimately lies in its technical achievements. Blomkamp’s script is complicated, multi-layered and thematically substantial. He expertly interweaves several storylines, including a B-plot about an occult Nigerian slum gang looking to acquire the prawns’ abilities, that coalesce together brilliantly in an ending that’s surprising, haunting and purposely ambivalent. So, too, does his directorial style contribute to the film’s realistic, gripping edge-of-your seat style. Much of District 9 is shot documentary-style, with main characters recounting the prawns’ arrival, segregation and subsequent plot events. Raw “footage” of the aliens’ rescues from their ship is interspersed with news coverage and commentary throughout, making the viewer feel pleasantly lost in something real, plausible and spellbinding. Brilliant CGI renderings of the prawns and their spaceship are coupled with combat and chase scenes worthy of any blockbuster summer thriller. The final shootout conflict between the humans and aliens, some of the best firepower exchange since Michael Mann’s Heat, is nothing short of virtuoso. Part social humanitarian commentary, part adventure, part shiny explosions, District 9 proves that intelligent, esoteric filmmaking is not only alive and well, but can effectively entertain while still appealing to our baser moviegoing instincts. It’s a film I’ll be watching and re-watching for years to come.