Greetings from sunny San Diego, everyone! ScriptPhD.com is in the absolute epicenter of sci-fi, comics and the illustrative arts: Comic-Con 2010. Armed with a press pass, our wonderful correspondent Brian Stempien of Lefty Films, and an industrial-sized vat of Purell, we are proud to bring you four-day coverage that spans the nexus of sci-fi, graphic arts, design, technology, film, television, and of course, the forum that started it all, comics. Day 1 coverage includes an array of panels covering the origins that drive an artist’s imagination, the future of cultural arts in a digital age, the future of space exploration with Iron Man’s Stark Industries as a model, good sci-fi, bad sci-fi, sci-fi that will change your life, and a conversation with two leading visionaries of the sci-fi genre, J.J. Abrams and Joss Whedon. ScriptPhD.com also got to chat with the stars and producers of our favorite forensics show, Dexter. Plus, we have a little secret teaser interview with a certain MythBusters star that we’ve been teasing for a good while now! As we always do at Comic-Con, we pick our Costume of the Day as part of our compete Day 1 coverage, under the “continue reading” cut.

“What is the most contagious parasite?” asks Leonardo DiCaprio’s character Mr. Cobb in the early moments of Inception. “An idea.” From the tiniest seed, it spreads like a virus, he explains. This is what makes it vulnerable to manipulation and theft. In many ways, the same could be said for Inception itself. Bending time, delving layers of dreams within dreams, shifting between reality and fantasy, the movie is instantly contagious. By the final shocking scene, when four concomitant worlds finally weave together in a breathlessly taut salvo, one is left downright feverish. It also happens to be one of the smartest, best-written, enigmatic additions to the typically content-light action genre. ScriptPhD.com’s full review of Christopher Nolan’s chef d’œvre under the “continue reading” cut.

About a week and a half ago, scientists achieved a remarkable evolutionary stepping stone in the technological holy grail of eventually engineering synthetic life. Nicknamed ‘Synthia’ by her experimental progenitors, the latest discovery is a viable, self-propagating yeast cell hosting a bacterial Mycoplasma mycoides genome (consisting of non-biological DNA) purely composed in the laboratory. In eerily apt timing, Splice, a new science fiction thriller premiering this week, explores the scientific ramifications and bioethical morass encompassing the creation of a human-animal hybrid by a rogue superstar genetics couple. Under the “continue reading” cut, ScriptPhD.com’s review of Splice, discussion of the expanding frontiers of genetic engineering, and a special video interview with the director/writer, producer and stars of the film.

Back in March, we reviewed the stirring documentary Tapped, which chronicles the harmful environmental and health impact of our bottled water addiction. Since our World Water Day 2010 coverage, the filmmakers have embarked on an ambitious “Get Off The Bottle” 30 city, 30 day bus tour, set to conclude on April 22, Earth Day. Tapped director and producer Stephanie Soechtig took time out from the tour to talk to ScriptPhD.com about the tour, their efforts to educate people about bottled water, how the film’s release has impacted her, her wishes for changes in the advertising and marketing of bottled water, and things we can all do to make that happen. Day 2 of our Earth Week coverage continues on the theme of how valuable water is to our environment. For our interview with Stephanie, please click “continue reading.”

Happy Earth Week 2010, everyone! Here at ScriptPhD.com, we have devoted a number of articles to environment, sustainability and eco-awareness as part of our continuing “It’s Not Easy Being Green” series. This year, in celebration of the 40th anniversary of Earth Day, we are devoting the entire week to articles, interviews and profiles of companies, individuals and content that raises awareness of sustainability efforts and new ideas for the green science revolution. Because water lies at the heart of most modern environmental crises, we kick off Earth Week with CaptainPlanet’s review of the stellar new DisneyNature documentary Oceans, a truly spectacular oeuvre that celebrates the majesty of our most important and delicate resource. We also include a number of practical, easy things you can do right now to make a difference globally by acting locally. For our Oceans review and to find out what you can do to help protect our Earth’s water supply, please click the “continue reading” cut.

It’s Not Easy Being Green: ‘Tapped’ Out on Bottled Water (World Water Day)

“Whiskey is for sipping, but water’s for fighting.” —Mark Twain

Today, March 22, 2010, is World Water Day, an initiative formed at the 1992 United Nations Conference on Environment and Development. As we head into Earth Day next month, no environmental issue carries more sociopolitical, economic and health ramifications than a clean and abundant supply of water. Some of the highest global morbidity and mortality rates are directly related to lack of access to clean water—both in contracting communicable diseases as well as agricultural impact that aggravates famine. At the heart of this discussion is a frenzied (and growing) thirst for bottled water; Americans alone bought more than 29 billion bottles in 2007. If you have long suspected that bottled water is not good for the environment, but only had a hazy notion about the specific consequences of the bottled water industry, Tapped, an Atlas Films documentary about to be released on DVD, will knock your socks off. The film expertly chronicles the insidious practices of bottled water companies and the dire consequences it has on our collective health, communities, environment, economy and policy in ways you never would have imagined. Our special World Water Day post under the “continue reading” cut. 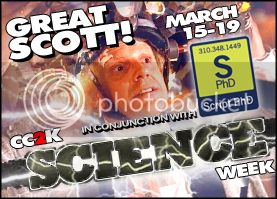 We are living in the time of science fiction. Literally.

Think about it: both 1984 and 2001 have come and gone. And while 2010 may be a disappointment to those of you who were expecting flying cars and time machines, many of the devices we take for granted now can trace their origins in science fiction of the past. Countless lists have been compiled of sci-fi inventions (a few excellent ones can be found here, here, and here), and Editor Jovana Grbić spoke about the topic during a recent UCLA School of Film colloquium. So in this post, for Day 2 of ScripPhD.com Science Week, I’d like to take a look at a few examples of the scientific inventions that science fiction has bestowed us—and the ones they’re still perfecting for the future!

The Hubble Space Telescope is the world’s first observatory that actually orbits—you guessed it—through outer space. Over the last decade, Hubble has captured some of the deepest and most detailed images of our universe. All those recent headlines about exoplanets: those discoveries come from Hubble. Scientists viewing pictures of light projected from stars over 13 billion years ago (almost at the origin of the universe): that’s Hubble, too. Hubble 3D documents the 2009 mission by the crew of the Shuttle Atlantis to make vital repairs to one of mankind’s most expensive, and significant, science projects. There would be no second chances. If the mission had failed, Hubble would be just another piece of junk orbiting above the earth, like my Direct TV satellite and Elvis’s body. The tension is real, the suspense extraordinary, and the imagery? Out of this world. And fortunately for terrestrial audiences, the entire mission was captured by the crew and director Toni Myers on some of the most breathtaking, brave film ever recorded. We are proud to make Hubble 3D an official ScriptPhD.com Editor’s Selection.

The Crazies poster and images ©2010 Overture Films. All rights reserved.

Esteemed drive-in movie critic Joe Bob Briggs has a single three-word critique of a certain kind of genre picture: “too much plot.” That’s a little easy and dismissive, but it does speak to an underlying truth: the best horror and suspense movies have to be easy to follow, or you’re in trouble. This particular genre is all about being In The Moment, especially if The Moment is designed to scare the heck out of the audience. Forcing them to pause and say, “Hey, wait a minute: why’s he doing that? Who’s that guy again? Why is he doing that?” rips the viewer out of that Moment. A better formula is to keep it simple. Or even better: keep it relentless. Out in theaters today is the well-made, competent, if flawed, bio-horror thriller The Crazies. Ironically enough, while The Crazies has some not-so-crazy plot and technical problems, the biology and science of this movie (with some minor exceptions) are the most enjoyable part. ScriptPhD.com full review and discussion under the “continue reading” cut.

An Appalachian mountain that has been decimated by coal mining.

One of the most pressing issues of our time is how and where we are going to get sustainable energy for a global population with a rapidly rising standard of living and the consumption that this entails. Approximately 10% of United States coal production [coal in general accounts for 40% of global electricity production] is procured through mountaintop removal, an environmentally-devastating extraction that literally involves blasting off (or removing) the top of a mountain to extract the coal inside. The practice gained popularity in the 1960s, when it started becoming too difficult and too costly to extract coal from underground mines. In our continuing “It’s Not Easy Being Green” series, ScriptPhD.com’s eco-blogger Captain Planet talks about the documentary Mountaintop Removal, exactly what it entails, and why this process is so much more costly than the immediate energy gained from it. Please click “continue reading” for more.