The Crazies poster and images ©2010 Overture Films. All rights reserved.

Esteemed drive-in movie critic Joe Bob Briggs has a single three-word critique of a certain kind of genre picture: “too much plot.” That’s a little easy and dismissive, but it does speak to an underlying truth: the best horror and suspense movies have to be easy to follow, or you’re in trouble. This particular genre is all about being In The Moment, especially if The Moment is designed to scare the heck out of the audience. Forcing them to pause and say, “Hey, wait a minute: why’s he doing that? Who’s that guy again? Why is he doing that?” rips the viewer out of that Moment. A better formula is to keep it simple. Or even better: keep it relentless. Out in theaters today is the well-made, competent, if flawed, bio-horror thriller The Crazies. Ironically enough, while The Crazies has some not-so-crazy plot and technical problems, the biology and science of this movie (with some minor exceptions) are the most enjoyable part. ScriptPhD.com full review and discussion under the “continue reading” cut.

Review: The Crazies
ScriptPhD Grade: B-

The Crazies, Brent Eisner’s (Sahara) from-the-bottom-up remake of George Romero’s little-seen 1973 horror flick, definitely has one driving problem: way too much plot and too much confusion for what should be a pretty straightforward story—a government toxin (or virus? or… something bad) is accidentally released in a small Ohio town. Exposure to it makes one go gradually, violently insane. And once a few random act of violence have been perpetrated on the small-town citizenry, the U.S. Government, at its most sinister, sweeps into town to round everybody up – the healthy, the diseased, and the might-be-either-ones. Town Sherriff David Dutton (Timothy Olyphant) and his local doctor wife Judy (Radha Mitchell) must fight off the infected Crazies, who look more and more like your standard Romero zombie the more their infection progresses, while trying to avoid the equally dangerous U.S. troops in their creepy gas masks, who will just as soon kill or imprison you than look into your red, rheumy eyes. Unfortunately, it’s not that simple. The story is rife with convenient but inexplicable leaps in logic, inconsistent plot points, and an erratic pacing that goes from truly Romero-esque bang-bang chomp-chomp to very long, very slow sneaky-weaky jump-out-of-the-shadow moments that, quite frankly, we’ve seen a million times before.

Timothy Olyphant does a shining job of escaping crazies, crazy government agents, and a sometimes-crazy screenplay.

The best aspect of The Crazies are the actors themselves. Timothy Olyphant of Deadwood (and a new ABC TV series, Justitifed) is the quintessential strong but silent good guy, just like he’s been before and will be again. Radha Mitchell, the Australian actress best known for Pitch Black, is sympathetic without being weak or stupid. And British actor Joseph Anderson, who’s met with unfortunate quasi-supernatural fates before in Control and The Ruins, doesn’t fare much better here as Olyphant’s deputy. In fact, he has the toughest character arc of all, going from charming good ol’ boy to prick to hero in the space of ninety minutes (and with a lot of time off screen). While ensconced in a shaky plot, the film manages to get most of the science, particularly the biosafety pandemic protocols, reasonably correct given the limitations. The production values are exceptionally high as well, and there are a few “keeper” sequences that will please horror fans regardless of the total package. Expect to hear folks talking about the bone-saw scene, or the pitchfork scene, or the carwash scene, or the truck stop scene, all of which, taken together, comprise about fifteen minutes of the movie. But that’s a lot of waiting around for a few cool moments.

The film’s nonsensical interruptions are the only real spoilers here. From the very beginning, viewers are asking “Is this a toxin? Is it a virus? Is it only carried in the drinking water, or is it airborne, too? If it is in something as ubiquitous as the drinking water, how come some people are affected right away, and others not at all? And what exactly does it do to you?” The first couple of victims are not enraged berserkers a la 28 Days Later, or mindless shamblers out of Romero’s Day of the Dead. The first victim looks more befuddled than insane; the second looks mildly pissed off but absolutely rational in the stalking and incinerating of his innocent family. In fact, one of the oddest things about The Crazies is that nobody seems all that crazy for the longest time, although it’s true that a movie called “The Sullens” or “The Befuddleds” probably wouldn’t attract the same crowd.

What’s more, once it becomes obvious – barely after the credits have rolled – that the U.S. Government is not only behind this but well aware of the accidental infection from before the beginning, you have to wonder what all the fuss is about. One actor, with the most thankless job in the movie, shows up late in the game to spell it all out for us. The poor guy has his car rolled, his head bloodied, and his exposition about the government’s complicity interrupted by a shot to the head all in a three-minute sequence. The culprit is a tailored biological agent; government agents know what it’s going to do to the populace, so why do they hesitate on the evacuation until things get really bad? They have total satellite camera surveillance (again, we see that in the first three minutes); why do they have such trouble finding rebellious evacuees and errant Crazies wandering around in broad daylight? In fact, if the Feds are as ruthless as they seem, why try evacuation at all? Why not initiate the Final Option first rather than last, since you’re never going to let any of the uninfected back into the public sector anyway – this is a secret infection. And since when was the U.S. Army so inept that it couldn’t throw a decent perimeter around a tiny Ohio town of 1,200 – one sitting out in the open plains no less – without holes big enough for an eighteen wheeler to drive through – literally, an eighteen-wheeler. 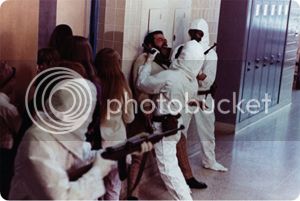 Government agents in protective suits round up pandemic victims in the only believable aspect of "The Crazies."

For all its faults, The Crazies actually gets most of its science right, in a delightful surprise to ScriptPhD.com. A biological agent spreading through a local water supply would most likely have a relatively quick onset, as is seen in the film, but would also affect far more of the population than is shown on-screen, most likely for entertainment purposes. Patient populations exposed to an engineered biological virus would be screened for a high fever if not showing other symptoms, a detail the film executed correctly. However, as in The Andromeda Strain, the proposition that this virus would somehow go airborne in a short period of time, or ever, is at best unlikely scientifically. Quarantining and social distancing at the spread of a potential pandemic is indeed one of the first and most recommended guidelines. Furthermore, it is impressive that health workers and government agents are equipped with Level A biosuits, a detail missed in the horrifically inaccurate Outbreak, where civilians are allowed to wander into and out of a biosafety level 3 laboratory without them. However, the panic and brutality shown to the civilian populance was played up for dramatic effect.

Eisner, who showed just how ham-handed he can be with action pictures in Sahara, does pretty much the same thing for horror movies with The Crazies. He isn’t content to pull out every one of these well-worn horror-movie tropes a single time; we get to see them two or there or even four times each. Ever since the original Scream deconstructed the horror movie, we should know better. Something new, please, along wih the something old and something borrowed. It could be worse – far worse. There are just way too many been-there-done-that’s and way too many questions for what should be an easy, straightforward slice of quasi-zombiesque Theater of the Paranoid pic. That doesn’t make The Crazies bad; it just makes it… not too bad.

Brad Munson is a Los Angeles-based writer, editor, marketing coach, and advertising creative content developer. He is the author of The Mad Throne, Inside Men In Black II, and Rain. He is also the Editor-in-Chief of the fantasy, sci-fi, horror website All About The Rush.com.

~*Brad Munson*~
******************
ScriptPhD.com covers science and technology in entertainment, media and pop culture. Follow us on Twitter and our Facebook fan page. Subscribe to free email notifications of new posts on our home page.